Questions of Realism and Idealism in Early Renaissance Portraits

“Find the painter who could be trusted to produce an acceptable image,” says Italian writer Matteo Bandello, however, the trick, according to Woods-Marsden, was to appease the commissioner. As portraiture became a norm within the spheres of the elite, artists were still pressured by their patrons to render these likenesses under an idealized guise. In rejecting mimesis, these representations were somewhat dishonestly embellished. Garish facial features were muted, distinguishing characteristics were accentuated, and depictions in profile harked back to ancient imperial images. 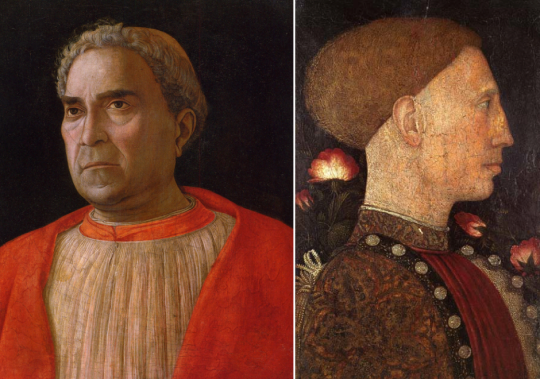 Andrea Mantegna, in example, with his “relentless realism” was dismissed as a proper portraitist. His sitters did not earnestly receive his brutally accurate illustrations. Contrariwise, the contemporary Antonio Pisanello captured his upper class clients “in heroic and panegyric terms.” Although Italian noblemen praised Flemish naturalism for its verisimilitude, they most assuredly preferred the pretentious and glorified flair of the Italians.

Function must also be considered in the complete understanding of these works. Many portraits served as a means of propagandizing the reigns of these rulers. Adorning walls of palaces, castles and those of their allies, they also had a tendency to serve as surrogates in the absence of the sitter. Portraits worked to placate political ambitions and social magniloquence.